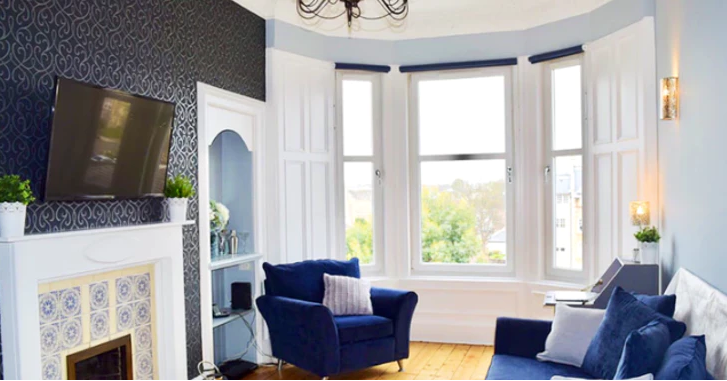 A CALIFORNIA woman who was banned from renting out her Edinburgh flat on Airbnb after noise complaints has launched a legal bid to stay in business.

Nicola Golden, 49, has rented out her property short-term since 2017 – and says she has only ever received one complaint.

But council chiefs served her with an enforcement notice preventing her taking guests at the Newhaven flat – a move she claims is based on untrue accusations.

Nicola, who currently stays in Pleasanton, California has hit back at claims that she is running one of many “party flats” in the city, geared at accommodating tourists.

Earlier this month we told how councillors and heritage chiefs warned the turnover of tourists at “party flats” disturbs residents and prices people out of the property market.

It came as hundreds of thousands of visitors flock to Edinburgh as this year’s Festival reaches fever pitch – with more than a quarter opting for short-term rentals rather than hotels.

Nicola said: “I’ve lived, studied, and worked in Edinburgh for many years – it’s the City, and the community, that I call home.”

“If I was running a party flat, if I was disrespectful to my community, if my guests disrupted the local life, or if I was running a 24/7 365 day a year hotel with no attention to health and safety or noise disturbance then maybe my property would need to be reviewed – but the evidence clearly shows that I am not.”

She continued: “I am part of a booming industry that brings culture, diversity, wealth, and life into the City of Edinburgh and I take great pride in my ability to both stay connected to the City I love and that I get to share it with my family and my guests.”

“It would be a terrible shame if that were taken away from me.”

Ms Golden’s case is being backed by the Association of Scotland’s Self-Caterers, the Scottish trade body that represents the traditional short-term letting sector.

The ASSC helped raise £17,000 to fund her case and are looking to raise a further £112,000 as she takes her appeal through Edinburgh’s Court of Session.

If landlords are barred from running short-term lets, trade chiefs fear there will be a “significant barrier for growth”.

It’s estimated 120,000 guests will stay in properties rented by Airbnb during this year’s Edinburgh Festival — with the company claiming the homes being offered out could be worth up to £48million to the local economy.

ASSC Chief Executive, Fiona Campbell said: “While we are disappointed that it has come to this, the ASSC stands firmly behind Nicola in her fight against what appears to be an inconsiderate and poorly-made bureaucratic decision.

“Self-catering properties like Nicola’s are a vital part of Scotland’s world-leading tourism offering and this case threatens their continued contribution to our valuable sector.

“All of us in the traditional short-term rental sector want to see a fair deal for everyone involved – picking on a part-time proprietor in this disproportionate and baseless way is not the way to do it.

“We hope that justice and common sense prevail in this matter and the ASSC stands ready to help to the full extent of our abilities.”